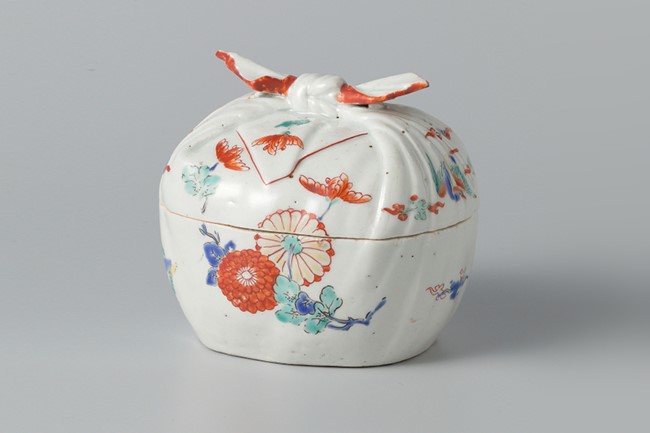 Box in the shape of a knotted cloth 1670-1690s RIJKSMUSEUM, Amsterdam

I first came into contact with Kakiemon porcelain in 1989, when I came to Nagasaki as a student. When our group of exchange students was asked what interested us, I raised my hand and said ‘art’. A very kind person then took me on a day out. We got into his vintage Volvo, drove around a sunlit Omura Bay and on to Arita. It was a glorious day. The landscape shone and my guide and I had many interests in common. These included a love that I only later realised we shared: a passion for English leather footwear, noticeable when he took off his shoes to go into a string of reception rooms in Arita. The main reason for my happiness, however, was my encounter with the porcelain industry of Arita. It was on that day that I decided to pursue the study of Japanese art. Naturally, our tour also took us to the Kakiemon workshop and I still remember the awe I felt for the skilled craftsmen, throwing their perfect pots and painting their immaculately executed designs. I knew so little then, but I did realise that this had to be porcelain of the very highest quality. From the foundation of the Dutch East India Company in 1602 onwards, Chinese porcelain had been flowing onto the Dutch market.

In the decades since, I have never ceased studying Arita porcelain, and in particular Kakiemon. I looked at shards, examined trade records and over the years I came to understand the issue of colour. It is important to remember that when Japanese porcelain started to be traded with Holland in the 1650s, porcelain had been a part of the Dutch interior for several decades. From the foundation of the Dutch East India Company（VOC）in 1602 onwards, Chinese porcelain had been flowing onto the Dutch market. Having porcelain in the interior was thus not a new thing. If you had been born in 1650 into a well-to-do household, your parents and probably also your grandparents would have had some porcelain on display. However, there was an element of Japanese porcelain that set it apart from the more usual Chinese export wares: it was also available with overglaze enamels. When Kakiemon came onto the market in around 1670, it surpassed any previous export ware, and the consumers in Holland were aware of this. Sometimes it is said that people in Europe could not even tell Chinese and Japanese porcelain apart, but for a discerning member of the elite in Holland this was certainly not the case. We can surmise this fact from documentary evidence of the early 18th century, when the characteristic Kakiemon style stopped being available. There are, for instance, auction catalogues that classify the porcelain not only as ‘Chinese’ and ‘Japanese’, but also within the latter into a special group, the descriptions of which clearly indicate Kakiemon: ‘old coloured Japanese porcelain of the first quality’.

Clearly, my fellow countrymen of three centuries ago understood what I instinctively saw three decades ago and am now able to comprehend more fully: both old and new Kakiemon indeed is ‘Japanese porcelain of the first quality’.