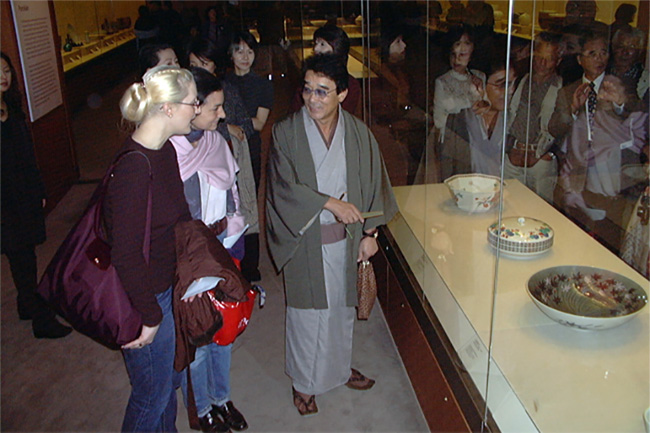 When someone mentions “Kakiemon,” the listener must consider which Kakiemon is intended. For example, the Kakiemon of “I own a Kakiemon” is an artwork in the Kakiemon style. In “I work at Kakiemon,” it means the organization known as the Kakiemon Kiln. And “I am Kakiemon” means that the speaker is a person named Kakiemon. Just one word, “Kakiemon,” may indicate a work of art, a kiln, or a person, and it’s up to the listener to determine which, based upon the context.

I’ll never forget an episode when the meaning pivoted from the work of art to the person. It happened during an exhibit of porcelain from Saga Prefecture that was held in the Japan Galleries of the British Museum from October 2000 to January 2001. Work relating to the exhibition had brought me to England, so I was able to attend the opening ceremony on October 20. A formal greeting was given by the 14th generation Kakiemon, in his capacity as chair of the Saga Ceramic Art Association, splendidly dressed in traditional Japanese clothes. The ceremony ran its smooth course, and the next day or soon thereafter I had a chance to visit antique shops with Kakiemon. After having checked out several places, we entered one where the proprietor launched into an explanation of a 17th century Kakiemon. With his eyes twinkling, Kakiemon the artist listened to the British antiquarian explain the venerable porcelain Kakiemon, while I was ready to burst. Finally, I could restrain myself no longer — “He is Mister Kakiemon, fourteenth generation!” The antiquarian’s jaw dropped and stayed open. That emotion: avidly describing the virtues of a fourth or fifth generation Kakiemon, only to have the 14th generation Kakiemon in front of his very eyes. The uncanny emotion filling his face transcended time and space—works of art can be transmitted from generation to generation, and the successive generations of Kakiemon artists also continue as a living tradition, and there he was, caught between the two.